How Forbearance Programs are Impacting the Medium-Term Housing Outlook

President Biden’s extension of the moratorium on foreclosures, expanding the program until the end of June, has had a ripple effect across the housing sector. Biden’s extension allows first time home owners to extend their existing mortgage forbearance program an additional six months, and also allows new borrowers to request forbearance through June 30th.
Housing has been a key pillar of the Biden Administration’s domestic policy, and this announcement comes on the heels of many other initiatives throughout the pandemic to allow financially-constrained households to defer their payments, keep their homes, and avoid mass levels of foreclosure.
And with so many American homeowners facing both health and financial hardship in the wake of COVID-19, the mortgage payment relief program has seen high levels of participation. Findings from Black Knight, a mortgage data firm, indicate that as of March of this year, 2.3 million US homeowners were in active forbearance plans.
With numbers of that magnitude, experts have been concerned that these measures are only deferring, and not solving, the kind of foreclosure onslaught that came with the 2008 Global Financial Crisis. So far, cities nationwide have experienced sustained demand and constrained supply, which has caused the housing market to increase in its strength. But the equation for supply and demand is always fragile, and it’s clear that a number of factors are at play. Below are some of the most important considerations in understanding how the mortgage forbearance strategy impacts the market’s short and long-term recovery.

During the Global Financial Crisis, households experiencing unemployment or significant reduction in income were forced to sell their homes or face foreclosure on their properties. This resulted in an estimated 3.7 million foreclosures in an incredibly short period of time.

Not only were those families displaced and set further back on their path to recovery, the forced sales and empty units flooding the market increased the supply of homes, which lead to a notable downward pressure on home prices—a negative outcome both for struggling families and for the industry at large.

An investigation into mortgage servicer practices at the time led to lengthy, grueling Congressional committee hearings and subsequent legislation that would restrict and discourage highly speculative activity.

Thus, in the lead-up to this pandemic-induced downturn, home price appreciation and homeowner equity have mitigated some of the foreclosure activity we might have seen otherwise. 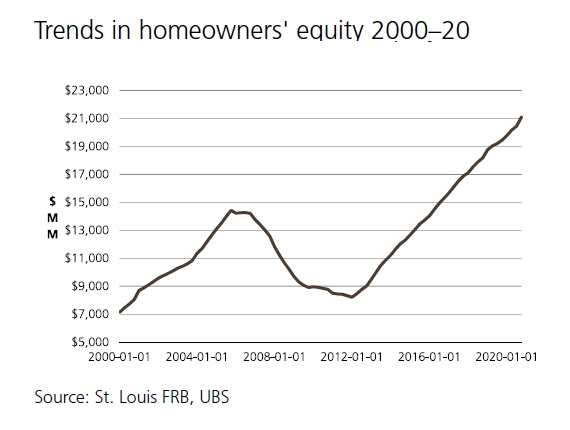 t’s important to understand in full what the forbearance strategy offers in order to understand its longer-term effects. Different from “forgiveness,” forbearance programs allow homeowners to defer their mortgage payments using a number of mechanisms.

As the job economy continues to strengthen, homeowners can reinstate their payments when they’re able, paying any missed amounts in one lump sum, or they can establish a repayment plan to add a portion of their missed amounts onto their monthly payments.

Otherwise, they can defer their payments to the end of their loan term, and/or modify the loan to make monthly payments more manageable for their changed situation. With memories of the disastrous foreclosure rates experienced in 2008-2010 and the Congressional hearing they had to endure still fresh in their minds, mortgage servicers have taken a different approach this time around.

What the Numbers Say

While the opening of the US economy has been slow and staggered, it’s been moving at a pace that’s still faster than experts expected. Due to the relatively swift recovery of jobs across all industries, the percentage of homeowner requests for forbearance programs has been consistently declining.

Last May, the average percentage of a mortgage servicer’s portfolio volume that was in some form of a forbearance program was at a high of 8%. This April, that number was closer to 4%—a significant improvement.

Additionally, there’s hope in how consumers have managed their forbearance programs. Of the mortgages that entered forbearance, about 45% are now performing regularly, 15% have been paid off, 5% are in active loan litigation, and less than 3% became delinquent. 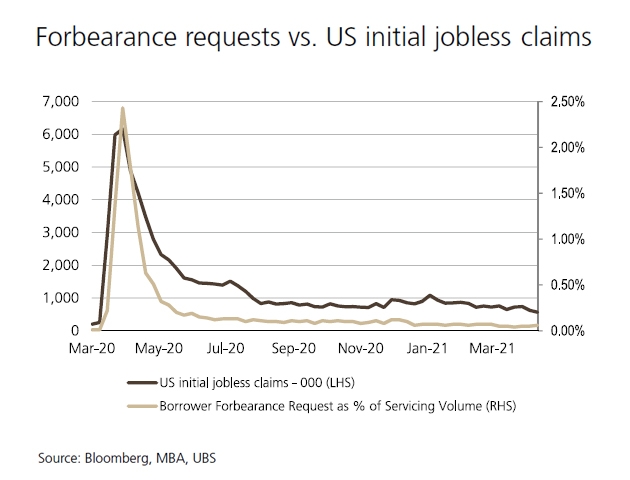 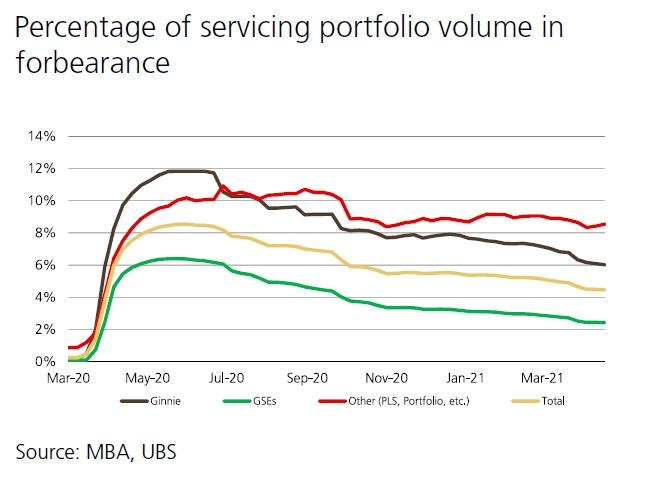 The real saving grace for the housing market as a whole, as it has maintained its strength and positive trajectory through the trials of COVID-19, has been the shortage of homes for sale. The healthy supply scarcity has created a competitive market, where new building projects are seeing strong demand and value-adds are being well rewarded. By preventing forced sales and foreclosures, mortgage forbearance has been an incredibly important factor in maintaining the supply shortage.

The policy established by the Biden Administration to assist liquidity-constrained households will continue to impact the situation as it moves forward. With the financial crisis not far behind us, we are seeing more collaborative relationship between the Biden government and the private sector. While there might be an uptick in foreclosures when the forbearance program expires, the strength of the market as it stands bodes well for overall resilience.

The forebearance programs put in place could allow families more space and time to manage their payments, minimizing the downstream spike in supply and improving the market as a whole. Both of those factors—a strong market and more time afforded to homeowners—should make a massive difference as we continue to engineer a recovery; the real-world outcomes will only become apparent as time goes on.